The Garioch Fiddlers Strathspey and Reel Society’s 35thFiddlers Rally under the conductorship of Susan Simpson was held in Inverurie Town Hall on Saturday 21 April.  The near capacity audience clearly enjoyed the evening’s Scottish entertainment.

Compere was the ever-popular Colin Dempster who as always enjoys a great rapport with the local audience.

Guest artiste for the evening was Iona Fyfe who was accompanied by Luc MacNally on guitar and showed why she has won accolades over the world with a selection of interesting ballads which intrigued the audience. Close to her Huntly roots, her best song was the “Banks of Inverurie” and her adaptation of June Imray’s “Quine who did the strip at Inverurie” amused all despite being questionable to strict Inverurie historians. 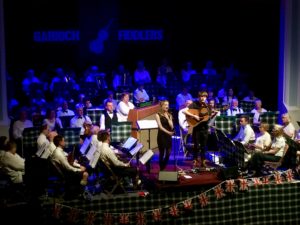 After welcoming the audience whom he thanked for their continued support over the years, Jerry Morse the Chairman, welcomed guest musicians from both neighbouring societies and as far away as the Netherlands to the orchestra along with guest players Kirsty Livingston on bass and Colin Burgess on drums.  He then introduced both Neil Hehir, the leader of the orchestra, and then musical director Susan Simpson to the stage who proceeded to set the mood for the rest of the evening by conducting a set of Marches, followed by a waltz composed for pianist Yvone Crighton by prolific local composer Ian Thow. This year’s novelty item was entitled “The Royal Wedding” which was enjoyed with great fun by both orchestra and the audience.

The winners of the yearly competitions for younger members of the Society were presented with their awards by Nicola Tierney. From the junior section (under the age of 15), the Alex Garden Memorial Trophy for best overall performance was won by Jessica Thomson whilst Rhona Fraser was awarded the Bert Morgan Cup for the best slow air, with the George Smith trophy for best first time entrant being won by Hannah Farquhar.

The winner of the title “Garioch Young Fiddler of the Year 2018” and the Bill Johnston Memorial trophy was won for the third year running by Finlay Morse who played his winning selection accompanied by Alexander Davidson with a standard of playing showing why he was selected to spend his Saturdays playing in Glasgow at the Royal Conservatoire of Scotland.

As usual, the second half was opened by the Junior Section who have been extremely well schooled under Alexander Davidson standing in for Nicola Tierney, whilst she has been on maternity leave this year. The junior fiddlers finished their performance with the premier of a new tune composed by Alexander entitled “Junior Garioch Fiddlers Welcome to Isabella Tierney”. As always this was very much appreciated by the audience and by proud mother Nicola who heard the piece for the first time.

The final selection including traditional Scottish songs, with Lynn Sinclair, Colin Dempster and Jo McDowall at the microphone, was followed by piper and a former “Young Fiddler of the Year’ Kenneth MacBeath, playing the Rose of Kelvingrove, forcing the reluctant fiddlers to play in three flats. In a new and welcome initiative, the final set combined the Senior Orchestra and the Junior section playing  a set of reels which rounded off an absolutely fantastic evening. 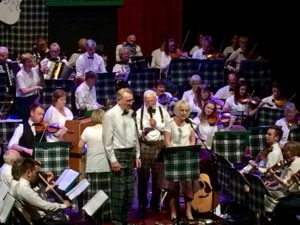 and departed in very good spirits, looking forward already to the 36thAnnual Fiddlers Rally. Can it really be better than that of 2018?