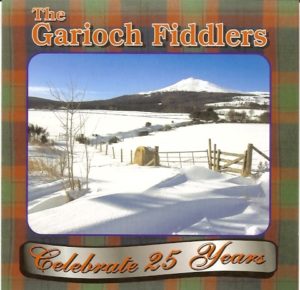 This CD celebrates 25 years of musical enjoyment for both its young and not so young members playing a range of Traditional Scottish tunes, among them tunes by J Scott Skinner and the late great accordionist – Jimmy Shand, and some of “our own”.

On this, our fourth CD, we feature a mandolin solo by Peter Fraser; the whistling of Colin Dempster; Margaret McLaren’s ‘spoons’ heard in Black Maria; the Slow Air, Hannah’s Cradle Song composed and played by Ian Coutts accompanied by Dorothy on violin and Anne on piano; and lively jigs composed and played by Ian Thow. Bill McIntosh’s Floo’r O’ the Garioch features Neil Hehir and Nicola Auchnie on violin while Colin Dempster’s two step is given rousing treatment by the full orchestra. Together these show the range of talent both in playing and composing within our Group and we feel that we have much to celebrate in this our 25th Year.