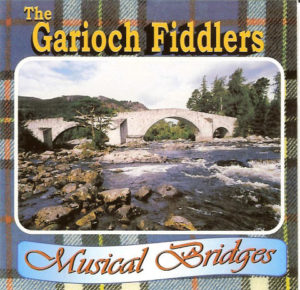 Musical Bridges is our fourth album and our first on CD. It is a collection that is as interesting as it is enjoyable. The bridge on the fiddle, the main instrument used in the Society; the many bridges around the countryside of the Garioch; our music as a bridge between players crossing the age gaps, a bridge to the New Millenium, its hopes and aspirations – Musical Bridges is a very apt title.

Our choice of music includes the Ovie Gilbert Two-Step composed by one of our accordionists, Ian Thow, and is a tribute to a well-loved and respected former playing member with the Society. Bruce Edmonds on violin takes you to Ireland with a solo performance of the Londonderry Air. Colin Dempster’s Return to Orkney reflects the speed at which the Society wanted to return to the Island, while Sharon Hassan’s evocative air, Orcadian Nights, which was played during a special service in St Magnus Cathedral on our second visit, will remain a treasured memory for those of us who were present. These tunes composed by our members fit well into the long established Scottish traditional music also recorded on this disc .