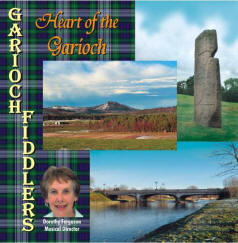 This latest CD from the Garioch Fiddlers is particularly poignant as it is the last of the series directed by Dorothy Ferguson, who is retiring after 25 years as conductor, although she will be continuing as a playing member. Her own commitment throughout these years has been fundamental in achieving the polished musical blend which can be heard on “Heart of the Garioch”, a musical compilation which includes original compositions by members – The Golden Globetrotters by Colin Dempster, and the slow air Bert Morgan by Ian Coutts. The 6/8 March The Battle of Harlaw is another link on the 600th anniversary of the battle.

As well as maintaining the high musical standard of the Garioch Fiddlers, this CD will be a collector’s item. Hope you enjoy it.